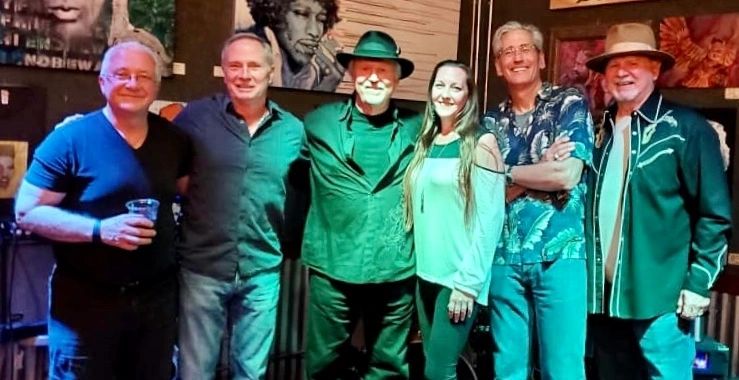 Performed November 22, 2019 at the Wellington Amphitheater (Video by Terri Monahan)

Live at Rudy's in Lake Worth, FL

Covering artists from Earl Scruggs to Kenny Chesney, Merle Haggard to the Band, Rolling Stones and Dylan with a little Hank thrown in, the band has its own unique style and puts on a great show.

To add to the fun, they sprinkle in some of their own originals, as well as songs written by their Nashville songwriting friends.

Mike played bass early on in garage bands and became a journeyman guitar player for many years until he joined Ron and Al to form Americana Jones in 2011. A singer-songwriter, Mike keeps the engine running on time with his stay-at-home bass riffs.

Jerry is a veteran of the country music scene in Nashville. His expertise and execution on the piano are second to none and it’s allowed him to tour with some of Nashville’s most revered stars. Lucky for us, Jerry decided to return to his roots and found a musical home with Americana Jones.

Ron plays electric guitar, sings and writes. As a life-long student of music, Ron reaches out to his friends in Nashville and is constantly introducing new and unusual guitar licks into the band’s repertoire with styles ranging from Chet Atkins to Danny Gatton and Guthrie Trapp. He’s been producing Nashville songwriter shows for over 20 years…and playing for over 50.

As a singer-songwriter, Al spent 16 years on the road with The North Star Band and The Pheromones in the 70’s and 80’s. His bands recorded and released 8 albums over the years. Best known for his songs, Redneck Hippie and Yuppie Drone, Al settled down in Florida and now sings, plays guitar and harmonica, and provides musical direction for the band.

Cori began singing in local musical theater productions and soon gained a reputation as one of the area’s top female vocalist. Whether she’s performing as a soloist or adding harmonies, Cori’s vocal prowess is a welcome addition to the band.

Leonard  was classically trained as a rudimentary, symphonic and jazz drummer, and began playing professionally at 17 at various jazz and rock clubs in the Jersey Shore area. He’s been a journeyman of late, playing as a pro side-man in multiple local and jazz bands. Known for his quick hands and steady beat, Leonard is the most recent addition to Americana Jones. His virtuosity shows as he is as comfortable driving the group’s rhythms with congas as he is on a full set of drums.

Drop us a line!

Better yet, see us in person!